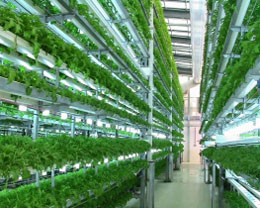 Last week at the Nordic Exceptional Trendshop 2010, held in Denmark, one presentation took urban agriculture to the next level. A collaboration with NASA, you might even say it launched urban agriculture out of this world, and into the future.

The idea is called Agropolis, a combination grocery store, restaurant, and farm all in one building, employing the most advanced technologies in hydroponic, aeroponic, and aquaponic farming.

As it stands, Agropolis is still just a mere idea, with little more than some cool graphics to back it up. But regardless, Agropolis ushers forth a new wave of thinking about urban food systems.The team behind the Agropolis concept proposes that this new generation of store would be an ecosystem unto itself, a finely tuned orchestra of parts in balance, that would not only be totally envrionmentally sustainably and friendly, but also just plain producing the freshest food around.