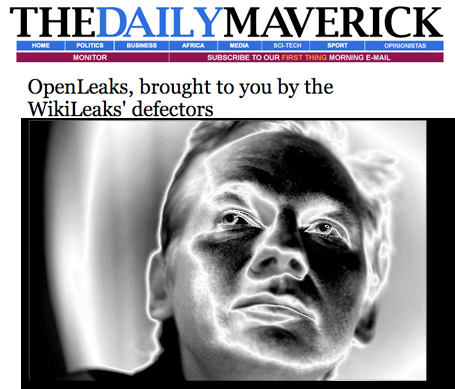 After falling out with WikiLeaks spokesman Julian Assange in September, a group of former insiders at the now-notorious whistle-blower site are about to launch their own project, OpenLeaks. Describing the new site as a conduit rather than a publisher of leaked information, its founders hope to avoid the political controversy that has enveloped WikiLeaks, and serve the mission of bringing down corrupt regimes and organisations better.

By SIPHO HLONGWANE – The Daily Maverick

WikiLeaks has always had a twofold function: Storing content supplied by whistle-blowers from around the world and then publishing that content. The second function was what eventually dumped the organisation in trouble with the authorities.

One former high-ranking staffer at WikiLeaks hopes to avoid the controversy that has dogged the site by foregoing the publishing role of online activism altogether. Daniel Domscheit-Berg, formerly the WikiLeaks spokesman in Germany, and right-hand man to Assange, is launching Openleaks today. He calls it a “neutral conduit”.

Speaking to Forbes, Domscheit-Berg said the site would partner with media and non-governmental organisations, which would accept material from OpenLeaks and publish it themselves. Like WikiLeaks, the site will have a secure online drop-box, but unlike WikiLeaks, the source can designate which media organisations the leaks will go to for fact-checking, redaction and publication. If the designated recipient of the leak does not publish the material, it will be passed on to another partner. OpenLeaks will reportedly partner with five newspapers worldwide initially, but will expand to include the likes of NGOs, news agencies and labour unions. Crucially, OpenLeaks will not publish anything themselves.

OpenLeaks is not a competitor to WikiLeaks, Domscheit-Berg told Forbes. “The people working on it don’t think WikiLeaks is headed in the right direction,” he said. “But what we’re aiming at is fundamentally so different that we don’t see it as competition.”