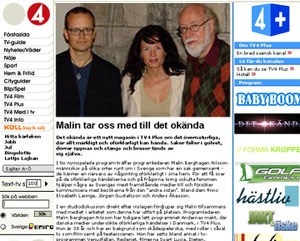 On the 8th of December 2004 an experiment on the mobililty of consciousness was aired on a national TV channel in Sweden as an episode in the TV series ”The Unknown” on TV4 Plus. The aim of the experiment was to determine if it is possible to prove that the mind can travel and perceive far beyond the location of the physical body. The result was very successful. The response was very positive. Many people contacted and greeted me. ”At last someone dared to be tested and managed to succeed”, was one comment. 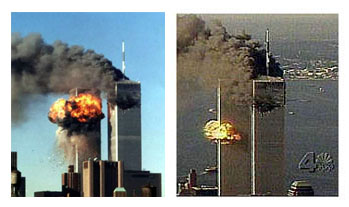 The experiment was done in May 2003 in co-operation with Nordisk Film a Swedish television company located in Stockholm (contact person Caroline Giertz).

A target photo (1) black and white was chosen and placed in a locked experiment room at the TV company in Stockholm on May 17, 2003. The photo was supposed to contain a strong emotional event.

I worked from a different location in Stockholm. A few days later On May 23, 2003 I sent a mail containing the answer: ”WCT, 9-11” and a picture (2) found on the Internet was delivered (my first attempt) to the TV company.

The technique used was close to Extended Remote Viewing, Phase 2. But it should rather be described as a kind of Self-guided Out-of-Body Journey in the waking state.

I decided to deliver a photo instead of a drawing of the target site. I picked a photo found on the Internet that was the most similar compared to the impressions.

The experiment was not done in front of live cameras. The TV show was a reconstruction of the events. It was not a double-blind test.

To show that we ordinary people can do things that are considered to be impossible. You can do this too. If you can do this ”impossible thing”, what problems and tasks can’t you solve? I want to initiate a debate and new research projects about our non-physical and psychic properties.

I am not a RV expert. I found evidence within the scientific community on psychic functioning. I learned RV on a couple of weekend courses and I learned OBE travel from CD discs from the Monroe Institute. Then I practised at home. I am just an ordinary guy that wanted to know the truth about psychic functioning.